The Identity of Ruscombe 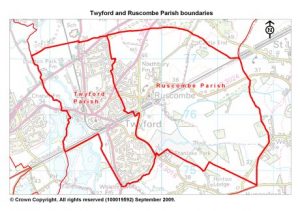 Geography: Ruscombe is in the north-west corner of the ancient Windsor Forest, and 33 miles from London on the old Bath Road. The Parish covers 1294 acres (just over 2 square miles). The soil is mostly gravel, with a subsoil of gravel and clay. But the northern part is on chalk, and in the south-east is a tract of alluvial land. This was Ruscombe Lake but, since 1820, when the Bray Cut was made, it has been drained and cultivated. Ruscombe is low-lying: the highest point, around the Church, is 170 feet above sea level; the lowest, in the south-east, 121 feet.

Before the London Road, the principal route through Ruscombe was the narrow winding lane from Waltham, through Twyford, to Sonning (now the B3024 back road to Windsor). From this, near the Church, another lane branched off to Castle End and Hare Hatch; and another down to the Lake (Southbury Lane). Along these old lanes, largely coinciding with the courses of water springs, most of the houses were built.

From the 18th century, the London to Bath Turnpike (now the A3032 London Road) became a very busy coaching route across the north of the parish. In the mid 19th century, this was overtaken by the Great Western Railway through the centre; and in the early 20th century by the A4 bypass across the northern apex. However, the growth of the Village around the London Road, up Pennfields, and down New Road to the Stanlake crossroads and on to Ruscombe Turn did not take place until well after the Second World War. F

Origins of the name: The name “Ruscombe” seems to have evolved from “Rothescamp”. The ending is from the Latin “campus”: an open, unenclosed field. “Rothes” may be from an Anglo-Saxon personal name (such as Hroth), the Celtic word “rhos” (Latin “rus”) for undrained moorland (with rushes), or the Teutonic “Royd/Roth”, meaning land cleared of trees. The latter derivations would apply well to Ruscombe Lake, or to the chalkland de-forested by the Romans, respectively.

History: The first mention of Ruscombe is in 1091 in the foundation charter of the cathedral of Old Sarum (Salisbury in Wiltshire). This records the endowment of the cathedral with the church and tithes of Sonning, along with “ten hides of land in Rothescamp”. Ruscombe Church was probably first built as a field chapel to the mother church of Sonning. South and west of the churchyard was the green over which the parishioners had rights of pasture (vastly bigger than the present village green). Beyond the green, over the open country across the (future) London Road and round by Castle End to the Waltham Lane, were the common fields cultivated according to the old manorial system by the lords of the manor and their tenants. The Lake was a swampy waste from which the parishioners gathered rushes and firewood and pastured their flocks of geese and perhaps cattle. The numerous pools of water also produced fish and wildfowl in abundance. In 1535, Ruscombe was divided into two small manors, Northbury and Southbury. The Ruscombe Enclosure Award, completed in 1832, finally enclosed, consolidated and reallocated all the land in the Parish, including the land (half the area in total) which until that point had remained open fields and commons.

Industry: The industrial history of Ruscombe is virtually all related to agriculture. There used to be a rodyard at the corner of New Road and Ruscombe Lane, stripping rods for making baskets and hurdles. There was also a brickworks in Ruscombe Lane, making the distinctive local “cherry-red” bricks; and later an iron foundry, mainly repairing agricultural machinery. All three industries lasted until the middle of the 20th century. They have been succeeded by a modern business park in Ruscombe Lane, and a second across the Parish at Castle End.

The Natural History of Ruscombe

Natural habitats: Ruscombe has a varied landscape of fields with hedges, rough grassland patches, ponds, and small woods, all of which help the movement of plants and animals through the countryside. Today, the parish still retains many natural features and habitats that date from a time when people were reliant on the land for a living.

Wetland: There is a network of old ponds that were probably originally used by drovers moving their flocks and herds through the village and also serving the local osier industry that ceased after the Second World War. The amphibians that inhabit the ponds require rough grass, logs and scattered trees around the pond edges. Another freshwater environment is provided by the Broadwater stream, which may have the potential to support water voles.

Woodland: The parish has some small, but isolated woodlands, one of which is a traditional coppice site that historically provided materials for local basket making and the nearby nurseries. The small woods are distinct landscape features and are important for wildlife. The woodland edges are the most important part for wildlife such as birds, butterflies and flowers.

Trees: There are some fine specimens of veteran trees around the parish. These old trees are of high ecological and historical significance supporting many more species than much younger trees. They are likely to be survivors from when the Windsor Great Forest. Dead and dying trees should be left standing wherever possible for the habitat they provide to birds, bats and invertebrates.

Farmland: The farmland environment in the parish provides good wildlife habitat in that there are fields on set-aside and relatively small field areas surrounded by traditional Enclosure hedges and ditches. Some open fields that were once orchards are characterized by boundary hedgerows and pollarded poplar, that were originally planted to provide windbreaks and assist pollination for the fruit trees.

Conservation and protection: In recent years some of the old habitat sites have been undergoing restoration and management for wildlife and biodiversity. They are home to a variety of threatened flora and fauna such as the great crested newt, four species of orchid, bluebells, mistletoe, bats and badgers. These natural features are highly valued by local residents.